This was the first 6hr challenge event hosted in Ireland. It was organised by the East Antrim Marathon Series on a coastal route along Belfast lough starting in Whiteabbey just north of Belfast.

The event started in the Lough shore caravan parkand went south along the lough shore until you hit Gideons Green (for those that know the Belfast marathon route this is the third relay hand over point) before retracing its steps back to the caravan park. It was a 4.2 mile circuit.

I was lucky enough to be at the genesis of this event when Peter and Craig visited the Battle of the Somme 6hr challenge event in Kent at the start of last summer and were so taken with the format that the St Patricks Day challenge was born . I love this format as it is so inclusive from the 5K fun runner to the very serious Ultra runner. All are welcome, all finish and come away with a medal and a finish time regardless of distance covered.

As is customary for these 6hr challenges the medal was awesome. This is sure to be a favorite event around the holiday going forward.

I picked up Kris early doors in Dublin (5:45 am) for the trip north. Unfortunately, Kris had a training incident during the week which has stopped her running at the moment but she was entered, had promised the medal to her dad and wanted to come. But sensibly she decided that she would walk. Never the less she managed 4 laps for 16.8 miles despite the issue. She will be back to full strength in no time.

We arrived in good time to pick up the numbers and laminated lap counter from the registration area. We then followed instructions and parked up in Whiteabbey and walked back to the start. Despite the instructions very few seemed to park where they were told and stayed in the car park. Fortunately the weather was pants and the car park didn't get over full. The weather forecast was for rain all day and at the start it was more like a polar expedition than a spring race with coats, ponchos, hats and gloves everywhere and all were huddled like penguins in the bandstand as we waited patiently for the start.

The race briefing done and we headed the few yards to the start and we were off. I started pretty near the back as the intention for me was always 8 laps. In my head I had a 2:10 half, 4:30 mara and go out on my 8th lap around 5hrs 15. Fairly quickly the field spread out. 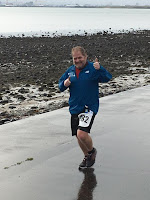 The loop itself was a very simple out and back. Exiting the Caravan park we traversed the short promenade in Whiteabbey as far as the Wooden Pergola before turning onto the coastal path at he poop shaped statue. We then followed the coastal path until we hit Gideons Green where we did a small clockwise loop before retracing our steps back to the start finish area. We got our laminated lap counter cards clipped and either stopped by ringing the bell or went out on another loop. You had to be out on your last lap by 5hrs 30 mins. There was also a marathon distance measured which involved an additional 0.5 mile out and back after lap 6. So pretty simple.

The weather itself was extraordinary with a very poor start and first couple of hours brightening to a beautiful afternoon that could even be described as warm. Thankfully the whole day got a lot more pleasant as the weather improved.

Most of  the regular EAMS crowd was there plus a lot of first timers as the entry had been much extended from normal EAMS events to accommodate the popularity of the event. Around 150 took part. At one point I felt a big deja vu from Last One Standing as there seemed to be exactly the same crowd there as was in Castleward including Sammy Daye. There was much talk of LOS as well as those looking forward to the Energia 24 worlds that is coming to Belfast on July 1st. 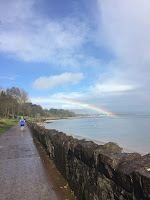 I knew many in the event who were all running well, except Shaun who inexplicably stopped after 3 laps looking very sorry for himself.  Seamus, Susan , Eimear and Philip were there getting in another marathon and Kathleen and David Brady seemed to be having a complete blast all the way round. It was great to see Teresa Taffe there as a leprechaun and all the village people were there as well as many others in St Paddy days gear. Jill continued here unbelievable run of events and Barry Shanks did a very swift 8 laps. DBRC were well represented with Karen despite shin splits putting in a strong Ultra performance and Anne managing to get 9 laps in (she is so ready for a 24 hr event). Dino also ran very strong with 10 laps just one behind the eventual winner and Anthony had his normal strong day out. Dee Boland training for the Shore track 24hr had a very steady 8 laps on top of a high mileage week and the ever young Helena Dornan topped another >140 mile week with a steady ultra. Gillian coming back from illness also put a strong marathon performance in with Gary.

My own race was fairly uneventful. Half came in 2:05 and marathon around 4:25 just on plan. I then went through a bad patch on lap 7 but picked up on lap 8 for a strong finish and just crept under the 6hr mark for my 8 laps in 5:58:50. Thus completing Ultra no 41 on my 100th completely different course.

At the finish area there was Guinness, a wonderful medal, crisps, chocolate and coke.

As is normal with EAMS events organisation was flawless with many marshals on the course. Water and isotonic drinks were everywhere. First aid and access to the race directors if needed was also good and I felt safe and well looked after.

The aid station was great and everyone embraced the whole event format fantastically and there was a great atmosphere at the end.