This was the 3rd running of the Tollymore running festival with a 10K, Half, Full and Ultra. The Half, Full and Ultra were all on the same 13.1 mile loop around the forest. It was as Linda Cunnigham reminded me at the end my home event as I could nearly see my house from the course.

The loop itself was hilly, like very hilly with approx 2000ft of climb in two very significant climbs in the middle of the loop. It also followed the beautiful Shimna river in the park for long periods and enjoyed spectacular views over Newcastle and the Mournes from various parts of the course. Being the autumn, the leaves had fallen and the colours were just stunning.

I had decided to do the Ultra today as last year due to a septic toe I had to drop to the marathon distance. This meant 3 loops with approx 6000ft of climb. The Ultra started at 8am and the Mara at 10 and the Half at 12 and the 10K at 2pm. The way things worked out I never saw any of the other races at all as I was at the back end of the course when they started. Kris was defending her title for last year and the conditions were perfect.

A 4am start for breakfast and  a jaunt up the road with a stop at McDonalds got us to Tollymore by 7:15. A lot of people followed their GPS's and got well lost and there was a lot of panic at the start. A quick youtube mannequin challenge and we were off on time. I had totally forgotten how hilly this course was and also how beautiful.  I was walking early on the big hills which surprised me as I had recently been in better form than I had been last year. The hills were tough and the first part of the course was relatively warm and humid, but as we climbed it got colder and when the wind turned into the face it got very cold. Conditions underfoot were good. I was however going slow and I had hoped for a 2:00-2:05 first loop but ended up with a 2:15.

This set the tone for the day and I was approx 10 minutes a lap down from where I wanted to be. So instead of a 4:30 marathon it was 4:45.  Mountain Dew and Coke were the order of the day at the bag drop which worked well and there were 3 very well equipped aid stations on the course and lots of roving paramedics. Things were organised perfectly.

The way timing worked out meant that I was on my own for long periods (hours) without seeing anyone and I was 46th overall after loop 1 and finished 43rd overall so passed few and was passed by few all day from early.

The third lap was tough and I was walking early even at the hint of an incline but I did try my best to run the downhill and flat sections. I have to say I was disappointed with a 7:31 finish as I thought I was in 7hr form but that was not happening from very early in the race.

Meanwhile Kris had a tough day as well some 20 mins down on last year and
came 23rd overall and 4th lady (some very classy runners ahead of her). She did however look amazing in her newly imported colour coordinated skort, top, gators and calf sleeve ensemble. Kate Murray also from Cru had a better day with a 1:53 in the half for 20th lady home and 119th overall in a field of 427 (kate also looked amazing). The half was won by ex Cru man Torben Dahl in a very impressive  1:24. The brother-in-law Kieran also kept his form for a very good 1:45 in the half. Everyone had gone home by the time I had finished except Marie Chapman who was 100m behind me all day similar to Dundalk (What a great Ultra runner she is). The rain started as I left the park (Phew!)

There were also some notable other runs out there today from Chris Denton and Paul Rogers in the Marathon. Paul getting revenge for a DNF in London. Also congrats to Philip McEvoy in his first Ultra after over 100 marathons and Susan Dixon and Seamus finishing in the dark with Susan also now able to call herself an Ultra runner.

My funniest moment was noticing up ahead a French "Game Of Thrones" tour dressed in Long cloakes with fur collars.  I shouted as I went past "L'hiver arrive" and got a lot of chuckles from them.

All in all it was a fabulous event and as tough as any Ultra gets. I guess I am just proud to have got around.

More photos to come  and video's 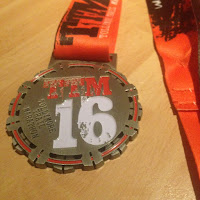 Strava results for today: Note GPS didnt pick up some distance and elevation because of the tree cover.