The support on the course is also second to none (well, outside of London and New York).

The weather was forecast perfect. The day for the race had been switched to Sunday and there was a record 19500 entered making it the 4th biggest marathon in Europe.

The weekend started off with a pasta party at Coach Cottle's wonderful
new house in Monkstown. There was more food that you could look at and it was good to chat to other people from the club doing the marathon and some first timers which is always interesting.  I picked up my number on Friday lunchtime and had a quick look around the expo. I went back again on Sat with Kieran (the brother-in-law, finish 4:09) and have to say the expo was smaller than I was expecting (very few bargains) but it was good to catch up with lots of people there.

The day of the race turned out as forecast with perfect weather and during the race I found it fantastic (though a little humid). Certainly the best conditions I have ever run Dublin in and this was attempt no 10. Up and out at 7am to find parking and leave off the baggage worked like clockwork. They had changed the toilet arrangements this year and I found them fine but a lot of people who waited until they got into their waves got left standing at the start. I suspect there will be some criticism of this.

My strategy was to go out at the back of wave 1 so that I would have a non congested run through the Phoenix park and the narrow bits afterwards. I got very caught up in this last year and wanted to avoid this again at all costs. This worked fine but I did find that the first 10K was slow at 54 minutes. This was more down to weight of runners and it being more hilly than I remembered. Support as always was absolutely super and the Cru support on the course was the best. I speeded up in my 2nd 10K and came through half way in 1:54. I should be able to convert a sub 4 from here but it would be very tight.

Starting at the back of wave 1 meant that I was in the big hole where there were no pacers. I didn't mind this and it was Milltown at mile 20 before the 3:40 guys came past me. I wasn't going at a pace that I could stay with them and they slowly disappeared. If I kept ahead of the 3:50 guys I would break 4hrs.  I became
obsessed by mile splits at this time and kept below my target time by 20 secs odd but had to keep going. Heartbreak hill was at mile 22 and I walked it knowing I had some time in hand but got the pace going again on Fosters avenue. Knowing there would be 1 million Cru supporting in the last 2 miles I knew that walking was not an option and kept things going and was comfortably under 4 hr pace.

Passing Ballsbridge was brilliant and there was lots of high fives and celebrations as a mile from the finish I had plenty of time. A steady last mile had me in at 3:57:21 and 5 minutes better than last year. Many pints were had and there was some great stories of triumph (Kate (3:44 marathon debut), James (national champ MV60), Brian (2:41)) and disaster (I particularly felt sorry for some of the girls, but they will be back). We also had a lovely club meal later that night where all the girls looked a million dollars and the guys made an effort. 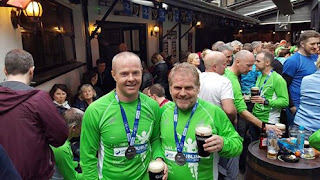 The next day however I realised I had made a big mistake as I had forgotten that the Dublin and national championships was gun time and not chip time. The 2.5 minutes it took me to cross the line at the start was ultimately added to my overall time for the championships. This gave me a gun time of 4:00:01. What was worse was that even though I was 3rd fastest in the MV50 Cru team there was a 4th member who had started before me and though slower in chip time was faster in Gun time. It looks like we missed out on Dublin Athletics Gold by just a few minutes and I was no longer a scorer on the team even if it podiumed (likely second).

To say I was gutted at having made such a mistake is an understatement. Even though I really hope it didn't affect the team outcome (dont think it did), I do feel like I let myself down a little as these things are won and lost with fine margins and I really had tried my hardest. Its also likely the last chance that I ever will have of scoring for the O50 team as next year there is a glut of good young fast ones ticking over the 50 mark.

My elbows will be sharper next year regardless.

I'll add some more photos later as I find them


Stats for the day