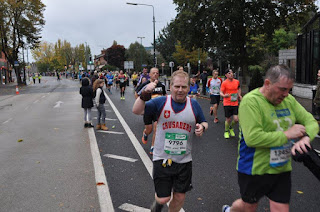 I managed to make it back OK from Snowdonia via the Ferry late on Saturday night. My Brother-in-law Kieran was due to run and was down just after lunch on Sunday. We spent a very nice time at the exhibition picking up numbers and things. Then a quiet evening with Pasta and Rugby.

The weather forecast was terrible (just like all my recent races) with rain forecast and very windy conditions but it was not due to be too cold. This is exactly how it panned out with terrible conditions for watching and OK conditions for running (once you got started). I suspect the good guys however found the wind taxing.

We were there early enough and lined up at the front of wave 2 with the 4hr pace group. I knew them all well with Olwyn and Joe from Crusaders and Niall from a while back. My plan was to hang onto the 4 hr pacers till after the park and then struggle to a 4:30. Given the week that would be a great effort.

We were off at 9:10 , ten minutes after Wave 1. I settled in at the back of the 4 hr pace group and off
we went. The first few miles were with the wind and fairly flat until we hit the park. I was still there and despite sore quads felt OK. I was still settled at the back so I kept going. I fell back a bit at the narrow section when you leave the park for the first time. This was more to do with weight of runners than anything else. When back in the park I managed to get back into the pack and settled behind Olwyn and in front of Niall. The atmosphere in the pace group was fantastic with lots of advise being dealt out particularly by Joe.

At 10 miles I was still there and decided to keep this going as long as possible. I came through half way in 1:59:40 and knew that 4hrs wasn't a possibility but I was still about 10 minutes up on where I expected to be.

Located at the back of the 4hr pace group through 15 miles I began to struggle but was still there at 18 miles. At the aid station at 20 miles I was 100m back and I heard Keiran shout over at me. He had just been passed and his race was over. I had to make a choice of stay with Kieran or keep going. Of course I kept going.

would be everywhere so walking was not an option. I had a bad period upto Fosters Avenue slowing to 10mins 40 seconds per mile but knew when I reached Fosters Av it was a relatively easy finish. I recovered immediately  back to 9 minute miles and was passing tons of people. In fact at the 10K timing mat I was in 7000 odd position and finished in 5000 odd position so passed about 2000 people.

Shane McGrath nearly deafened me at Milltown as did Aoife Quigley but this really gave me a boost. I found the last few miles easy and enjoyed evey moment. The Cru support around Paddy Cullens and on Elm Park was great and I came in in 4:02 about half an hour ahead of expected.

Kieran struggled over the last 10K but still broke 4:30. We met up after and went off to Meet Marie Chapman who had just done her 100th. It was great to meet Lesie, Kris, Kathleen and many other for a beer after.