This was an interesting week be it damp and cold 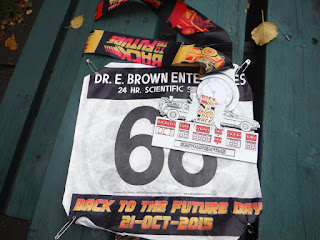 The Back To The Future marathon was put on by Rik at Phoenix Running in Walton On Thames in conjunction with TZ Runs who are more famous for the Kent Road Runner race. It being a mid week I was lucky enough to happen to be in London so could go along.

The weather forecast was awful and indeed for most of the race it
rained. I took the train to Walton On Thames from Waterloo which was surprisingly long and walked the 2.7 miles to the start.  On the way to the start I hit the tow path at the turn around point so pretty much walked the course. It was no where near as muddy as the last time I ran here (different direction) but never the less it was puddly and would be very sticky. I was absolutely saturated by the time I reached the start.

It was to be 8 laps of 1.6 odd miles out and back on the totally flat course. After a quick race briefing we were off. The race quickly settled into a pattern and even though the rain was constant it wasnt cold and the wind was equally into your face and back throughout the race. I quickly found my place in the race and stayed there. Amazingly for the first
time I was ahead of Janet who always beats me and managed to stay there. All the regulars were there including Anna and her dogs and Paul (with his new range of clothing now for sale).

The aid station was again faultless and on every lap you picked up a hair
band which were counted at the end. 8 laps was a marathon but plenty stopped early just to get the medal and a few went further to make an ultra. I came in 8th of around 50 that stopped at marathon distance.

The medal was of course spectacular and one for the collectors. We have of course now been tempted by the new "Top Gun" race in May.

A couple of days rest and I was off to Wales for the Snowdonia Marathon. I decided to drive from the South and stop over the night before to catch up with an old school friend and then leave the car at Holyhead en route to Dublin. Traffic was awful and I now regret not just driving up in the morning.

Weather again was atrocious at the start and everyone was saturated on the start line. It was nice that registration was on the morning and was seamless. There was also good shelter at the center. The start line was about a  1 mile walk from registration and we all headed off in unison to it.

The first couple of miles were easy and predominately downhill or flat  and spread the course out. Then at mile 3 we hit the first hill. It was very similar to the "Hell of the West" in Connemara and runnable even though I have to admit to walking some of it (very few walked) but it was nowhere near as tough as I was expecting. We crested at about mile 5 and then went down hill for around 3 miles. This included a 2 mile off road section that was tough enough and you had to have your wits about you. This soon gave way to tarmac again and it was a fairly nice net downhill run until half way. I came through half way in just under 2 hrs. Given I pushed it a bit on Wednesday this was fine. I did however know I had the toughest half to come. After half way there was a steady climb for 2.5 miles. I took it easy walking some portions but kept moving and when it flattened out upped the pace a little.

The big hill loomed at mile 22.5 and when it arrived the whole field was walking. It lasted a mile and a half and was similar to Mamore gap. There was nothing to be done but walk. At mile 24 we crested and the last 2 miles were off road and steeply downhill to Llanberis. It was treacherous and muddy and puddley. Wearing road shoes I had no grip and ended up on my bum a couple of times and I tentatively made my down. It was quad crushing stuff. Eventually we hit tarmac again but it was still steep. I was wearing 1000 mile socks and at the end I had managed to break through the toe box on both socks. Serious pressure. With about 400m to go we entered the village and crossed the line. I managed 4:24:48 and knew that I had to do a sub 4:30 to make the ferry. I immediately headed off to Holyhead and managed to catch the ferry (it was delayed by an hour).

It was a great race but logistically challenging to get there. Next year it is the day before Dublin so maybe not.