Today was not about times. All I wanted to do was be part of this fantastic event and catch up with and see how all the 10 in 10ers were doing.

Racing today started early with John Chapman taking on the course with a headlamp at 1:30am and would finish in 4:11 (impressive). There was the usual 8am starters who were out on the course before I arrived for the 9am start. Niggles, pain, sore feet, nails and hernia's was the chat at the start. Seeing grown men compare hernia's was a sight to behold. But luckily Ronaldo brought some sane medical advise to the party and everyone started.

We were off at 9am after the usual photos. I spent most of the first half with Frank McDermott. It had been
nearly a year since I last ran with Frank in atrocious conditions in Craughwell and it was a nice conversational pace (Franks only pace) and we sorted out all the issues with the marathon running industry in Ireland.

The beach was still pretty cut up and the wind was slightly stronger than I remembered on Sunday. We came through half way in 2:06 (5 minutes down on Sunday).

Frank then headed off running strong with Gary and his son as I decided to pull back and take it easy.


I got a wonderful surprise just before the wooden bridge when Olywn Dunne came past on her bike as a
roving marshal. I don't know who was most shocked, me or her.

She pushed on to chat to Frank and Gary and I met up with her at the far side of the beach where she opened a Pandora's box of running goodies. We also managed to sort out logistics for the Berlin Marathon. Olywn (former national 50K champ) has been training hard and I expect her to come close to a new PB c3:10 in Berlin and I look forward to running with her hubby Joe for the first half. GO CRU!! 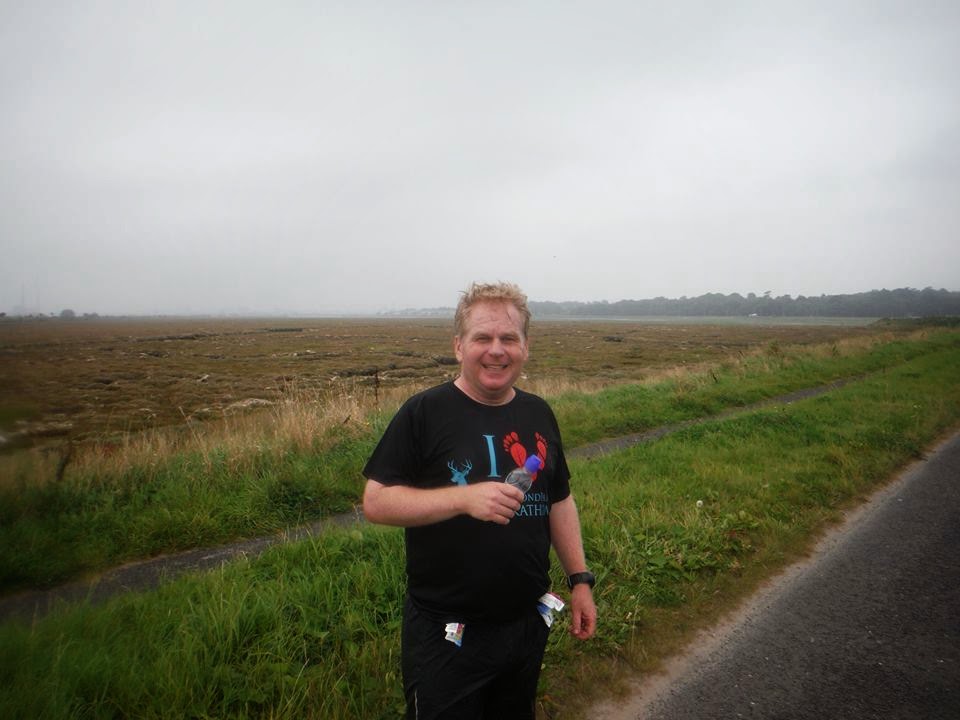 I stopped and took loads of photos of everyone on the course during the out and back section and I was well down on Sundays time turning at 3:23 (18 minutes down on Sunday).

I didn't suffer as much on the return leg with a nice wind helping all the way coming in at 4:37 and am now starting my taper for Berlin. I ran past much human suffering on the way back. How everyone keeps going with injuries is amazing.

The overall race also became interesting with Brian O'Kelly cementing his lead overall (averaging under 3:20
over 7 consecutive days). Barry Casserly really struggled today and Ronaldo and Dipak both took some time out of him. It will be an interesting weekends racing.

Lillian built on her lead in the ladies race.

Thanks in particular to Gary O Daly who gave up his own run to man the water stop on the causeway. Thanks Gary

I managed to make it to the office for 14:30 and don't know whether I am disappointed or not that no one seemed to miss me :-(

Good luck to everyone over the next few days and roll on the taper and Berlin.