This was my 7th marathon in 7 weeks so not surprisingly the legs were a little tired. So I decided I would try and emulate my effort in Tralee and run even spits under 2 hrs. That would be a great result.

About 1400 started the race outside the Evergreen Hotel in Derry at 8:30am. Unfortunately a few decided not to run because of the incident 48 hours earlier and there were lots of free bibs floating around. Martin McGuinness started the race. The course was a clover shape in and out of the city 4 times not unlike Limerick with hills only encountered when you left the river. It was a soft day great for running.

The first loop took us south of the city on a switch back along the Foyle. It was flat and the field quickly spread out. Because of the switchback you could see the leaders on the way back and they were settled into their groups. As expected Freddy Sittuk was quickly miles ahead. Ger Copeland of EOI and DBRC settled into 9th place . Ger would go on to run a PB 2:55. I settled in between 3:45 and 4 hr pacers.

We crossed the Foyle for the first time at mile 5 and hit South again this time on the other side of the Foyle, on the second and longest loop. This time we left the river and climbed about 500ft on a long long drag over the next 4 miles. I passed Wonder Woman and the Ostrich on this loop and was ahead of Jimmy Nugent today which is always a bonus. We turned and headed back towards the river along country roads before hitting the cycle track along the river. Unlike Belfast there were no relay runners and there was plenty of space. I came through half way in 1:57:30 and was feeling OK. Apparently the toughest half was over. We stuck to the cycle path for the next 3 miles before crossing the bridge again. I noticed the 4 hrs pacers only a minute or so behind me so now had a strategy of keeping ahead of them as long as possible. The peace bridge was 20 miles. That would be a good goal.

The third loop took us through the Waterside. This time past where "The Venue" was and up a long drag of a hill again. I past Dave Brady and Mo around here which surprised me. I had great support form friends here who took photos and cheered me on no end. At 18 miles we turned again towards the river and followed the railway track back to the peace bridge. As I entered the bridge the 4hrs pacers were only 30 seconds back and the inevitable was coming. The support at the far side of the peace bridge was great but the pacers soon got me at about 21.5 miles.

The only boring bit of the course was from here till 23 miles which took in an industrial estate and a park. If the organisers did something about this the course would have been top class. I struggled from here until 25 miles losing mucho time. 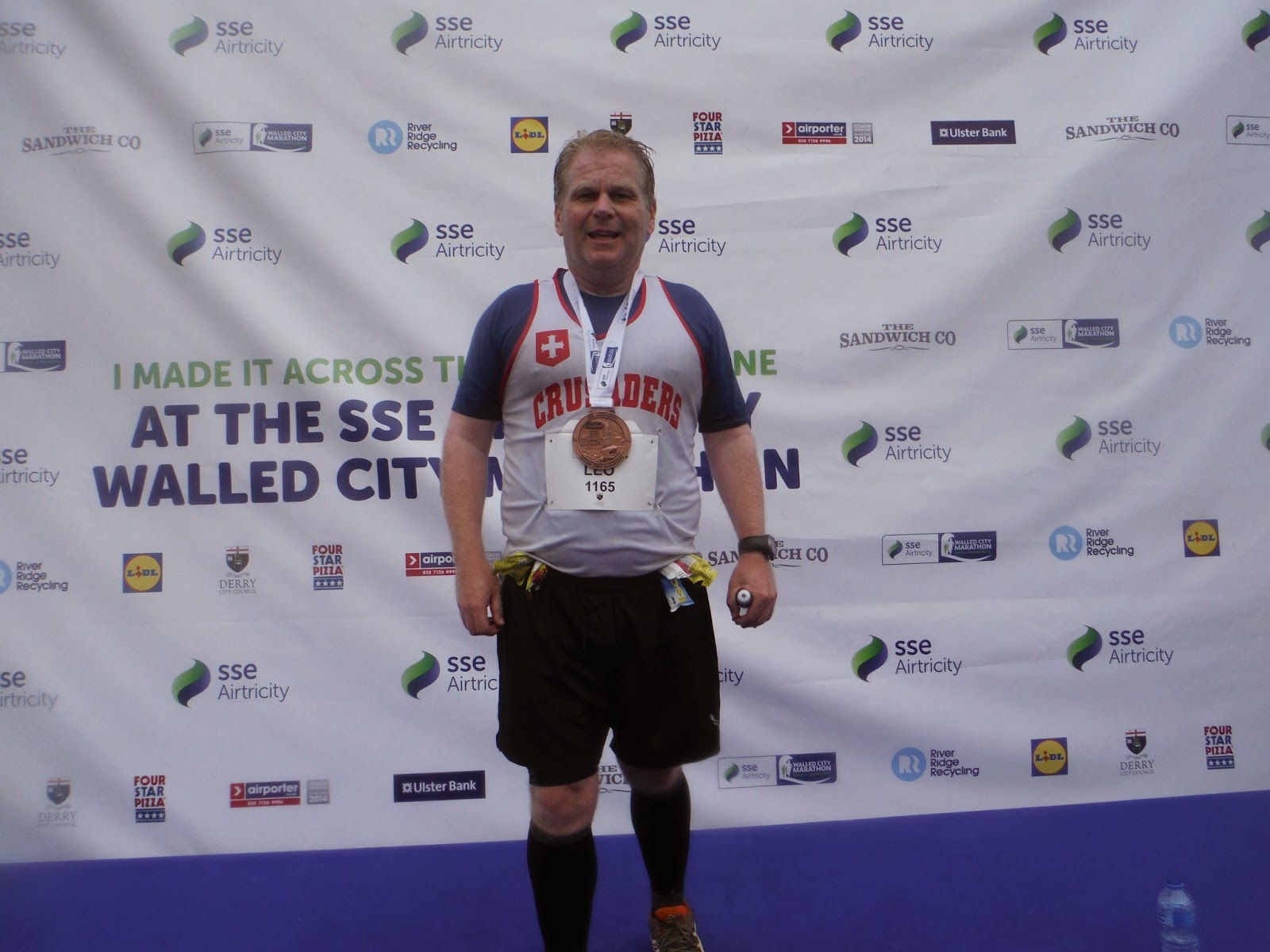 We entered the bogside and ran along "riot alley" and passed the murals and peace wall before truning sharp left at 25 miles along Fahan St. This was a very steep 400m section towards the walled city. I have to say this 400M was special and the most memorable couple of minutes in all the races that I have done. Thousands of supporters lined the route and shouted your name (it was printed on your number). It was like Alpe D'huez with room for only one runner and everyone patting you on the back and the noise was fantastic. All too soon we were in the city and on the last mile. This was downhill and fast and as we turned at 26 miles for the last stretch towards the Guild Hall the supporters were back in numbers and it was great finish. 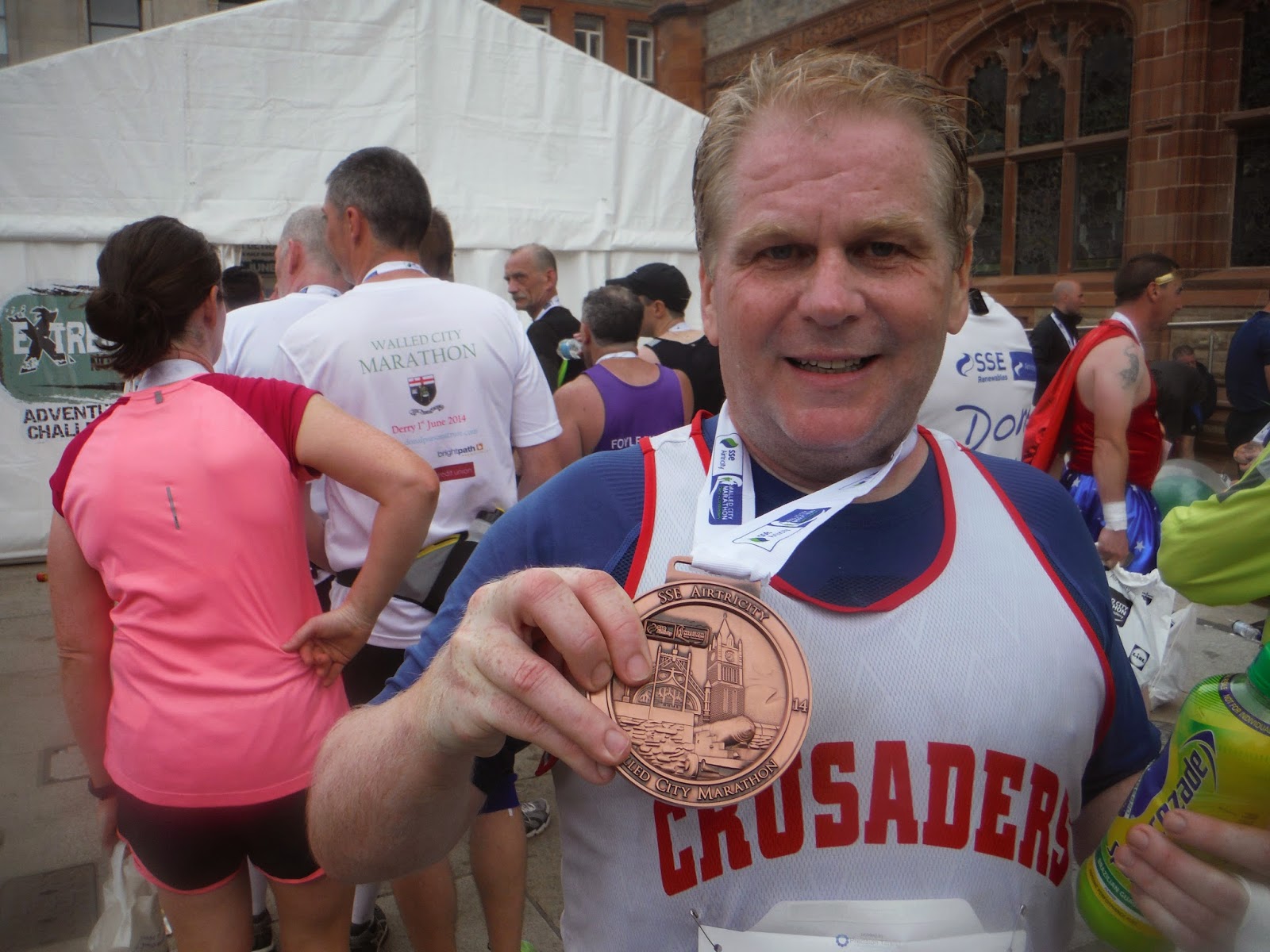 The Medal was HUGE , weighing in at more than 600gms (over 1lb) and the secure area at the finish was great with loads of photo opportunities and food and a goodie bag.

In my opinion this is the premier road marathon in NI and I will be back.