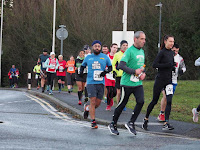 It did not disappoint as I had a super day.

I picked up Brenda and it was quite a drive (about 1hr 45) to get to the venue. We were there in plenty of time and could only find parking about 1km away from the start.

We brought all of our stuff with us and registered. It was the soft velcro around the ankle timing chips and once registered we hung around to the start. It was freezing.

There was a fairly big crowd and more would join throughout the day including a separate 10k race on the same circuit a couple of hours after us. It was a min of 50K for an ultra finish today. That was 25 laps. It was also significant elevation at 1600ft for the 50K. Special today was Martin Bush who had just completed his 1000th marathon. 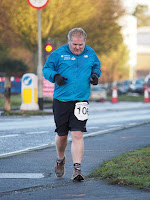 Leaving the start finish area about 200m of flat brought us to the start of "the" hill.  I had decided early that I was going to walk all the hills. This hill went up for around 800m to the 1km or half way mark. Parts of it were steep and it was fairly twisty but some people decided to try and run it all day.  I was not one of those. It was through a predominantly residential area and the path was footpath or road. At the 1km mark there was another timing mat to stop people cutting corners.

After the half way mark after about 200m of flat we turned left and it was a gentle downhill all the way back to the start area where our times and lap count was taken again. It was a very straight forward quite boring course but it was very urban.

At the 2km mark at the timing mat, there was a massive TV that immediately showed your name and how many laps you had done. I have to say it was one of the best timing setups I have come across.

The aid station was at this point and it had everything you would need and all day there was Indian food being prepared and doled out. It really was great and it was a great atmosphere. There was also no pressure on time as we had from 8:03 in the morning to be on our last lap by 3:53pm which was approx 8 hrs.

I didnt see Brenda all day until the 47K mark when she caught me up.  I was glad she had gone out and did ultra rather than stand around and get cold. She managed to take 7 minutes out of me in the last 3K (speedy!!!).

It was not a very taxing day and I really loved it. A long sleeved top, a nice medal and a full Indian take away including curry, Nan bread, bhagi's and Somas as well as a small goodie bag were icing on the cake.

We also had the pleasure of the oldest marathon runner in the world make an appearance at 107 years old. He holds the word record for 100+ which he did in 2011. Amazing really.