10 marathons in 10 days
This was a challenge that was in the making for a year. I entered with a special early bird price and had organised accommodation much in advance though it did change a couple of times during the year as I found better bargains. Kris traveled with me for the duration.

Each event was set up with different cut off times to be out on your last lap. For Marathon it was pretty generous but there was always a chance that with some of the shorter loop courses that you could get an Ultra in. When it was announced the week before that the cut offs would be extended and that there may be a 50K option on all the courses there seemed a real possibility of an Ultra everyday.

The series itself was individual events that you could sign up for independently and around 100-150 ran everyday. By doing all 10 you completed the series. Around 70 signed up for all 10. This meant that there were always plenty of fresh legs around. Everyone had their own strategy and what they wanted to do. This went from 10x10K's, 10x half marathons, 10 x marathons (some very fast Averaging <3:30) and 10 x Ultra's. There were many combinations in-between.

Suffice to say there was lots of running and my goal was to stay on the course until I was pulled off and what ever that yielded.

The attrition rate was also quite high with casualties all through the series which was sad to see but it was amazing that these guys kept turning up and walking or helping. It was truly inspiring. 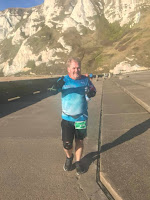 Being the first and second day we all took it easy except Jon, Paul and Martin (Martin would pull out with Hamstring issues a few days later) who were pounding out the fast ones. It was interesting to see what everyone was doing. Enda had a plan for 4:30-4:45 each day and walk an ultra lap if it felt Ok. Rob was pounding out the 50K's. Jimmi and Sam running together were also pounding out
the 50K's. Lots of people were stopping at marathon and Kris similar to me deciding to stay on the course every day until being hauled off. Lee also set out his stall early to just run and run and run. Nick of course chasing world records was on a 50K schedule daily. Lorraine steadily got through her 10 in 10. Dawn decided to go fast and long and for most of the series and kept it up. She however had some off days and near the end suffered bad (like most of us) from shin issues. Somei looking a little under prepared but stuck it out for a great series in the end and was a source of constant inspiration. The running couple Mylene and Pete eased through every day and just got stronger. Louise and Steve paired up and would run marathon every day and just got quicker and quicker. Debra, Paul and Sharon did an amazingly fast marathon series and Keith was consistently fast. It was all very impressive.

Kat doing what Kat does consistently came in marathon distance just over 6hrs every day. Neil ran with a variety of women everyday and not just Kat. Gary who was suffering from Achilles issues managed a few days before pulling out. Elaine always looking strong did steady marathons every day (including a park run on the second Saturday in Pegwell bay). The Twins were just magnificent and powered by wine sailed through the challenge.

There were many other who I didnt know all did fantastic. There were also many many 100 celebrations, flake runs, 52 in 52's , 300's and 250's throughout the week and we were well fed on cake.

So in near perfect conditions I got through 2 x 50K's in Samphire Hoe and thanked the lucky stars the wind stayed away. The concrete as always was brutal. In the ladies race Dawn was fast and went long and Tara sticking close to Paul had 50K in her sights every day. Kris also looking strong and went long both days.

It was interesting that there was a 50K option. It arose because Nick was chasing his world records and Guinness only accepted 50K or more as an Ultra. They became very popular and I managed 7 in total.

After Samphire Hoe we had a change of accommodation to a wonderful Air BNB in Margate center and that became Cru central for the next week. Day 3 also saw a change in venue to Deal. I thought I hadn't done this course before but when I arrived I realised that I had done it twice before at the Leap Day marathon and the Marathon Day marathon. Both were sub 4's so it had good memories. It was straight out and back into and through Deal before returning to the start line. There was light winds and nothing too wild and it ended up being a comfortable run for most. An extra lap and a short extra bit brought  in 50K. Paul had an amazing cake at the end for his 100th. Today's medal is one of my favorites from the series and is the traditional Saxon Shore marathon medal.

Day 4 we kept moving East, this time to Pegwell Bay and the Hugin Challenge around the Pegwell Bay reserve climbing past the Hugin ship at least 8 times. It was a rather short loop and I ran today with Paul and Garry. We decided to take it easy today and targeted 5hrs 40mins for marathon and came in at 5:38. An extra loop walked with Kris brought me in for 29.5 miles. Weather today was quite good as well and it was a rather enjoyable run.

Night times became recovery with lots of foam rolling, Netflix, microwave dinners and early nights. The new Air BNB also had the most wonderful bath and Epsom Salts became the formula of choice.

Staying in Margate meant the next 4 runs were fairly close with Day 5 and 6 within 2 miles of the house on Margate sea front. The weather however decided to turn on us and a howling gale came in throwing heavy seas into the mix. This meant the 6.7 mile loop became a loop of wind in the back and a gale in the face. It was a tough tough day. I have little memories of the day except keeping the head down and getting on with it. I still went long enough with a 50K run.

For Day 6 the weather improved a bit and we were back on the same course. I think everyone got concrete weary after this day and there was collective relief on getting through the day. Again a fairly un-exciting run but another 50K was done without too much drama. I did however notice afterwards a hot spot on the front of my right shin. Kris got us all worried about the throught of a stress fracture but there was no choice but to soldier on. Meanwhile Kris was still powering ahead with another long and seemingly effortless run. Both of us have managed Ultra each day at this stage.

Day 7 & 8 were on a new course for me at Ramsgate. This was surprisingly hilly at >2000ft for Marathon but still had a sea wall and long straight out and backs through the park. The weather was cold and we even had snow flurries on Day 7. My shin was getting progressively worse and as a consequence I was slowing down. Upto now I had been well under any cuttoff for getting out for an Ultra but in Ramsgate I found myself under pressure. On one occasion during Day 7 I had to put in a fast lap just to stay under the cutoff. Fortunately I made it by 15 minutes and got out for a 50K. On Day 8 I was even slower and sorer so decided to cut it short at 30.5 Miles. I enjoyed these two courses. One of the challenges had the Advent Calendar Medal which is truly special. Everyone else seemed to be coping well with most making it through with what they had planned. To date that was 8 consecutive Ultras for me and Kris was still powering away going long every day and looking stronger if that was possible.

Brenda and Sean arrived and everything was right with the world again and a new life was injected into the series. A nice night out in Margate if that isnt an oxymoron where we even seen "guns" Jon drinking Guinness before his 9th consecutive sub 3:25 and we were off for the last 2 days to Bettshanger park. Given my leg was hanging off and knowing the hilly course that was ahead of us I had no aspirations for an ultra today. But the running gods were with me and access road works meant we were on a new shorter loop with no normal ultra cut off time. The 2.4 mile loop meant that after marathon distance I had plenty of time to get out for the all important extra loop to make short ultra no 9. Brenda and Kris both had great runs and we all went back to Margate happy campers. Lucky for me as I would not have made the ultra cut off otherwise. Highlight of the day was Kris getting inducted into the Irish 100 marathon club. Sophie also became the youngest ever 100 marathon achiever at the tender age of 20.

News came through that the original (or nearly the original) course had been reinstated at Bettsanger for the last day as had the normal cut off. That was my dream of 10 in 10 Ultras in ruins as I knew that I just wasn't up for it and it was due to be a painful hobble for me. I was joined in the pain train by Somei, Dawn and Neil all of whom seemed to have the same shin issue interestingly on the same shin. Resigned to this we all headed off in very dodgy weather on a long a painful run. Some people did amazing with Jon and Pete in particular having their fastest run of the series. Brenda was on her 299th marathon and I was delighted to be there to witness this.

Finishing in near dusk we picked up the last medal and said out goodbyes and it was off straight to the airport. What an experience! I could have written a novel about this series but have decided to cut it short in the spirit of sparing boredom. I'm sure I have missed some amazing accomplishments in this write up for which I apologise and promise to edit and update it as they come to me.

A big thank you to Traviss and Rachel of course and all the helpers who clipped and fed and looked after us. You were all amazing.


Stats for all the days