I was back at 100 Aker Wood for the annual running Winnie the Pooh b2b marathon series. This year it was Eeyore and Piglet were the themes for the runs.

Collette and Kris had traveled over and Brenda also came along with us for a strong Irish contingent. Philip and Elma traveled separately for Philips first Winnie. He later admitted it was the toughest marathon that he had ever done.

The event was a 6hr timed challenge around the fiendishly difficult 100 Aker Wood course. This has several hills that are completely unrunnable on the 5.25 mile loop. Fortunately this year the weather was good. The course generates close to 3000ft of climb for marathon distance.

I only managed baby Ultra distance on day 1. As I had mis-calculated the flights on day 2  I had to stop short at half marathon to do an airport run.

On Day 1 at 9:30 we were off. I was in full fancy dress with Eeyore headdress and new Ultra Marathon Grey T. Kris headed off into the distance and similar to last year managed 7 laps for her 3rd out 3 wins on this course. She also was 2nd overall from over 150 starters. On day 2 she also did Ultra but was beaten by a lovely woman into 2nd place. She will have to content herself with 3 wins and a second.

It was a brutal course with the first mile being steep steep steep downhill. For me with my dodgy knees it wasn't runnable, and I am a crap downhill runner anyway. Mile 2 was back to the picnic aid station and was steep steep steep uphill. These first 2 miles took approx 25-30 mins on average. This was pretty much the same as the second 3.25 miles which though not as steep seemed to be endlessly uphill. The second half was a larger loop with drags more than climbs and it was always a welcome site to come back to finish the loop at the picnic aid station. 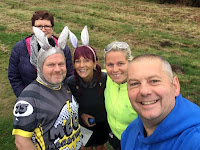 The Eeyore headdress lasted one lap before I was melting and had to dis-guard it. There was sweat coming out everywhere.

I wasn't feeling great today and knowing I had tomorrow to run as well I took it relatively easy making sure however that I was well within the cut-off for the marathon and always had an intention to go out for a 6th Ultra lap. I finished marathon in 5:40 with 20 mins to spare and headed out for the final lap and coasted in for Ultra #54. It was a tough tough marathon. 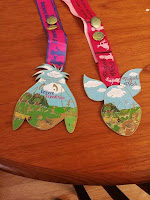 Philip, Brenda and Collette stayed together all day and did a solid run to finish. Brenda in particular is on her count down to 300 and needed today and tomorrows runs to make her goal of pre-Christmas.

This is one of the toughest courses you will come across and there were lots of brave efforts out there particularly with about half the field running day 2 as well. Philip Rand had hit 299th and 300th over the weekend which was great to witness.

As Day 2 for me was only a half marathon it doesn't deserve a report.