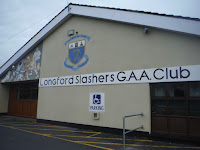 This is getting an established event, despite it clashing with several other big events around the country particularly the Connemarathon. Its organised by the very popular Brendan Doyle and takes place over 2 days around a 3.25 flat loop on the Grand Canal just outside Longford town.

The loop itself is based around the Ray Flynn permanently marked mile on the banks of the canal. Ray one of Longford's more famous exiles is still the current 1500m national record holder and with some other famous Irish middle distance runners holds the 4 x 1 mile relay world record. Ray also has >60 sub 4 minute miles.

HQ was the wonderfully named slashers GAA club and parking and registration was a breeze. Day 1 was the main day which say >700 competitors take on a 10K (very popular), half, full and 53K ultra. Day 2 saw a much depleted field try for b2b half's or a b2b marathon or b2b ultra/marathon. Naturally Kris and I went for the latter.

Given the state of my leg over the last 2 weeks with virtually no running and straps up the ying/yang, it was always going to be a lottery. There was an early start time for Ultra and marathon but some half and even 10K jumped in too. There was also a medium start for marathon and some half and a separate start for 10K and similar for half. It was probably too much choice as it must have been a nightmare for the poor timing company (who eventually got it all sorted). Given ~700 on a 3.25 mile loop it was very busy at times particularly when the popular 10k and half started. But it was manageable just. Organisation was brilliant with very visible first aid and the RD always available and nothing was too much trouble. Aid stations were very good with water, energy drinks and coke as well as fruit, gels and Haribo mini men (Yeah!).

The loop itself was along one bank of the canal, cross a bridge and back along the other side. It was a mixture of tarmac and gravel and for the most part flat. Interestingly a cone and tape was put up at interim bridge (IMHO due to allegations of cheating the previous year). I think everything was above board this year.

We went off on day one reasonably steady, and started lapping in 27-29 minutes. Some of the fasty's went off at suicide pace as normal and lots of lapping took place. This brought up half marathon for me in 1:56 before I settled slower.  The ladies Ultra was very competitive with Gillian and Kris having a battle for a couple of hours before Gillian pulled away. I thought she was well clear before learning that Deirdre Lynn came from somewhere to pip Gillian. I plodded around and managed a 4:20 Marathon and 5:20 50K before coming in for 53K finish in 5:41. My leg held out OK. Out of the 25 Ultra finishers Aidan Hogan impressed with a 3:40 and everyone seemed to have a great time in perfect conditions. In the marathon Donna Mcloughlin impressed with a great win and would repeat the feat on day 2 as did Aidan Hogan.

A long drive back to Dublin for the night had us return on Sunday for a marathon in the reverse  direction. Only about 70 took part today in a half and full. Again we went off in the early start which ended up being the main start for the day and on very stiff legs went round and round. Most everyone had run the day before. There were lots of sore tired legs around including my own. Half marathon came in 2:30 and it was no surprise that Kris lapped me before she posted a 4:24 for her second 3rd place of the weekend. I struggled to a pedestrian 5:10.