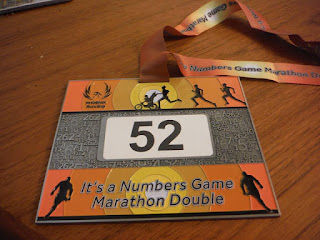 The concept for this was simple. Pick a number that was significant to you and that is your race bib. Run a double marathon over 2 days and receive a personalised medal. The medal is one of the biggest in the world for a marathon and at 1.25Kg is the heaviest.

Both days were in Walton On Thames using both of Rik's courses. There was a reasonably modest field of 50 on both days with I'd say around 30 doing the double marathon. The weather was due to be perfect for running and it was mud free.

There was a reasonable Irish contingent running with Brenda, Enda
and I all doing the double. Noel and the Twins (with Irish roots) also there for the double. There was also one Irish girl I didnt know running.

Day 1 started with Enda getting his MCI 50th medal. We were started on time on the 10K out and back route which ran to Hampton court on the tow path. Its a pretty straight forward route following the Thames with its many boats and particularly at this time of year rowers. The path itself was reasonably busy with bikes, prams, kids and dogs so you had to work around them.

I started off relatively modestly at just 4hr pace and came through the first of 4 laps in just under 1 hr. The aid station was as always a sweet shop with Freddo bars galore. There was everything a runner could need. You passed everyone 8 times in the run so you could judge how everyone was doing. One guy Lee was off like a bullet and would go onto beat 3hrs not only on day 1 but also on day 2 (very impressive). Most everyone else was taking it easy except Noel Kennan who blasted out a 3:40 to be followed by a 3:50 in day 2.

Lousie and Chris also started fast but Chris seemed to stop for a picnic at half way and Louise while well under her PB splits had a spectacular blow up at 20 miles.

I was through half way in just over 2 hrs and decided to ease off as it was a long weekend. The race itself was pretty uneventful as we clicked off the laps. As there was only 50 running it wasnt that busy in terms of runners and you got to spend a lot of time on your own. Costas, Enda and the rest of the gang likewise were taking it easy and there was a steady stream in around 4:30.

Fiona at the Aid station kept everyone amused with her cheering (if that is what it could be called).

I eventually finished in 4;17 without busting a gut. Home it was for a quiet evening of cooking, kids and Narco's on netflix.

Day 2 was more of the same, except that this time we went the other way on the tow path, on the 5K out and back towards the Walton bridge. The rowers were back and it was even busier on the tow path. Naturally today was a lot slower. But since this was the same course that I did the 2 in one day, and finished in a disapointing 5:44 I was not complacent. I was in a lot better shape than the last time and started reasonably knocking off the 3.3 mile loops in 35 minutes for the first half marathon. 2:10 saw me through it.

Its a very straightforward route and the only thing that is annoying is a fecking bridge that you have to go over 16 times. I ran the first 10 times but walked the last 6. I slowed badly in the second half but was determined to get under 5hrs and ran a pretty good last 10K in 1hr 10 to come in 4:50. I was reasonably pleased with that. Most everyone else had reasonable runs  though nothing spectacular (except for the ones mentioned above).

The medal was truely spectacular.

Strava results for both days: