I'm not English and was only 2 in 1966 so have no memories of England winning the world cup but I had a free morning and it was relatively close to home so I went along. The event was At Caldecotte lakes which I have ran once before, and have to say its not my favorite course, but this one was the reverse way round for a bit of variety. 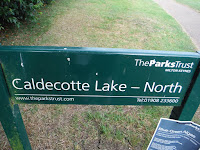 I arrived at the Premier Inn nice and early and one of the best things about this race is that the hotel gives over its facilities for the race and toilets and free parking is a bonus as well as some decent food afterwards.

Registration was out of the back of Foxy's van. I passed on the England souvenir mug thinking it probably would have meant more to others (there was a limited supply). It was forecast 22 degrees and sunny so I lathered on the Sun cream and decided to run with a hat. The clouds never really lifted and I doubt if it reached that temperature. It actually was quite comfortable running weather and the hat was unnecessary and became a pain later in the race.

This was part of a running festival (all world cup themed) with 2 marathons and half marathon the day before. All were well attended by all accounts and several were back today for marathon 3 in 2 days.  Big shock was Brian Mills who is approaching his 1200'th marathon didn't finish all three marathons only completing 2. This was un-heard off and unprecedented.

There seemed to be a modest enough crowd for this race with only 63 on the start list, but I suspect that some of these didn't turn up as it felt smaller.

At 8:30 after the race briefing we were off. Right from the get go my legs were pretty dead and the bruising on the soles of my feet from Samphire Hoe hurt. This curtailed any kind of decent pace. A rather pedestrian start had me coming through 10K in 57 minutes. Similar to last week however I had a decent second 10K coming through half way in 1:57.

The reverse route was relatively flat and hugged the lake (always on the left) and was just over 3.7 miles. The race its self was 7 full laps and a small half mile loop around the weir to start. I found the route very busy with pedestrians and cyclists (who gave little notice to us) and lots of families and couples with an extraordinary amount of loose dogs. Also every lap we had to run the gauntlet of many Canadian geese that had a habit of getting in the way. On one particular loop I came across a new obstacle in that just after the geese a group of people decided to light up joints and the smoke wafted across the course. That was different.

There are lots of bridges on this course and I have to say I had difficulty with one of them. It was long and flat, just before the lake side section, but seemed to have a hypnotic effect in that it bounced in front of the eyes. I stopped running it after a while as it made me feel dizzy (very weird). I think I prefer the reverse route as the second half of the loop is more interesting and seemed to go quicker.

A sub 4 was never really on the cards today as I lost interest and focus during the second half and wasn't even at 20 miles at the 3hr mark. I did rally a little when I got the bell for the final lap and had a strong last couple of miles for a satisfactory 4:07. The medal was nice and featured the Jules Verne trophy.  I ended up 14th out of 51 finishers.  Results Click here 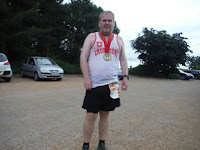 After the race I didn't stick around much as I had to get back but I did meet Noel Keenan whose parents are from Monaghan. Noel is eyeing up Samphire Hoe 100 next year and I think his plans are similar to what I did this year. Good luck Noel with that and I'll catch up with you at many events over the coming year.