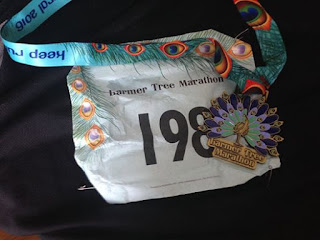 This is a white star running event held in Wiltshire/Dorset. I had run one of their events before (The Giants Head) which I absolutely loved and the attention to detail that these guys put on is extraordinary. The event was a trail marathon that was due to be very hilly. After Wednesdays Ultra I was on very tired legs so there were going to be no records broken today. Fortunately the weather forecast was pretty good and the mud that could have hampered us was not really there.

It was very very hilly though at over 2500ft climb.

The race head quarters was the Larmer Estate that borders Wiltshire and Dorset and was a very nicely appointed estate not that far beyond Salisbury. It was only 1 hr from home and I was there early and parked up. There was plenty of toilets at the start and the registration was very efficient. There was a small exhibition that sold all kinds of goodies and had a full map of the course. Apparently the course had been re-routed 3 times during the week but as I hadn't ran it before I wouldn't notice.

There were lots of 100MC people there and quite a few who had also ran on
Wednesday. In the estate there were a few Peacocks (Theme for the day) and a couple of very large Parrots flying around. It was a great atmosphere. I chatted to Fiona for a while before the race and lined up with everyone. After the now typical whitty RD speech where Carolyn was introduced as sweeper we were off.

I initially was surprised that the fist maybe 6 miles of the race was on road and
was predominantly downhill. I was up near the front but 1 mile in had to have a comfort break that set me back to fairly near the back of the pack. It took me to 5 miles to catch Fiona and her running partner who were training for Ultras and hiking the hills. This first 6 miles was fairly easy and we then went off road.

The first major climb came at 8 miles and was HUGE!. It was maybe 0.5 mile long and was vertical. It wasnt even close to runnable and we all scrambled up it. The views were spectacular at the top as you looked back over the valley. It was a lovely day for running. Eventually we crested and were back onto the road again. a 1 mile gentle downhill section took us to a very well stocked Aid station around 9 miles. We immediately were off road again and went through a forest undulating section with rolling hills. There was also a 20 mile race and half marathon on with staggered starts and the half marathoners at the head of their field were passing and peeling off on their route.

I passed Paul Sahota at around 10 miles. He was running well today and faster than

usual. He would go onto run a 15 minute PB later in the week which didn't surprise me.I came through half way in 2:25 which again didnt surprise me as it had been a tough half and I was on tired legs.

The second half had some very long steady climbs (1-2 miles long) but nothing as severe as the first. I was very happy to run most of them. There was only one of any real significance around 22 miles. This was just after we had passed the "love Aid Station" which was full of all kinds of goodies.

I was pretty much on 5 hr pace but had to keep pushing. Around 23 miles there was a steep "only walkable" inlcline just over a style which set my time back. I passed Ellan at this stage who was doing day 1 of an 8 in 8 and was running super considering. I also had been too-ing and Fro-ing with a couple of girls from Farham crusaders. I eventually got chatting to them and they also had ran Wednesday and were again running very well.

The last Aid station came at 24 miles and I was still on for 5 hrs. Then a last very steep incline arrived about 3/4 of a mile from the finish. Eveyone was hiking but I decided to push and ran up it. Just as well I did as I had to really push the last 800m to come in under 5 hrs. Most of those that walked the last incline missed out on a sub 5 by seconds.

Afterwards there was free massages and a choice of 4 free hot food  opions. I had a very tasty burger. The Medal was great and featured Peacoks and I was very pleased with the day.


Very nice video of the race