This was part of the SVN seaside series of marathons that was a 5 in 5 in and around the Kent Coastline in Later November. We were lucky enough with the weather as it was relatively mild, dry with wind being the only real challenge.

All the courses were flat and mud free. The series was sold out with about 120 running every day. 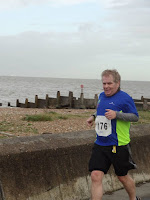 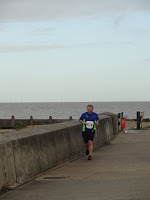 Oyster Bay was a new course and was 4 laps around Oyster Bay (at Herne Bay). The weather was pretty bad or more accurately the wind was pretty bad with the out section of each lap into a gale and the backward section quite pleasant. There was also a nasty small pier section at the end of each lap that was very exposed.

I decided today that I would try and push things and went out reasonably fast. I decided to wear my old Asics as I didn't want to risk the Hoka's on a full race. The wind was penal as we went out on the prom and followed the coast into  the wilderness.  3 guys went out very fast with the winner coming in at 2:57 (I just managed to not get lapped).  At the first turnaround I was busting to goto the loo and luckily there were toilets adjacent but this always takes a couple of minutes off. It was a relief to turn with the wind in the back and it was a lot easier and you could enjoy the many beach huts and small marsh sections. The surface was concrete or tarmac which wasn't a problem. I came through the first lap in 57 minutes and turned into the second. It was much of the same and the half marathon came up in 1:55. I knew at this stage that 4 hrs would be a big ask but stuck with the task.

Lap 3 and the wind really took its toll and 1 hr 2 minutes brought me through in 2:57 just in front of the winner finishing.  On the 4th lap the wind got me and I had a slow outward section having to walk into a ever stiffening wind at times. By the time I turned in 3:33 I new that 4 hrs was gone and took the pedal off.

I was really delighted to come home still full of running in 4:07 for 22 place and day 1 complete.

The medal was great and rest was the order of the day.

Day 2 was the at the familiar Viking Marathon trail. It was thanksgiving day in the US and there was a special American theme today including a US Viking medal.

I arrived late and started a couple of minutes down from the rest of the field. This was a 4 lap 10.5km loop out to Reculver castle and back.

I actually didnt feel too bad today. The wind was a lot better though still helped on one 5K and into the face on the second. But nowhere near as tough as day 1.

A nice steady pace brought me through the first half  in just over 2 hrs including a good 5K with Anna Hatton who was ever present.

This was a very uneventful race and an even pace brought me home in 4:28:13. There was lots of American candy at the aid station which was very well appreciated.

Day 3 was the 600th anniversary of the battle of Agincourt and there was the promise of a massive bespoke medal for this one. Arriving very much on time with Brenda and Collette it was very very very breezy on the sea front. The course was a T shape with first a short section downhill  from the aid station to the sea wall. We followed the prom into Margate right through the center of town turning at the far end. We then retraced our steps, bypassed the aid station and kept going for another 3K to the turn around point. This section weaved its way along the coast with the sea on one side and some interesting cliffs on the other. We turned and made our way back to the aid station.

Not surprisingly we were a little slower today and I turned after 2 laps in 2:20. The next 2 laps involved  some walking particularly into the tough breeze but managed to do very well inthe last 5K taking about 10 places for a 4:50:59 finish over all.

The medal was truly awesome and up there with my favorites.