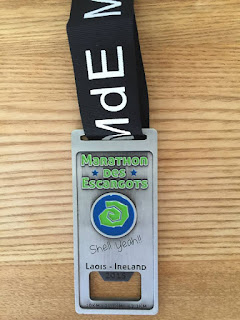 This was a reasonably flat race in the midlands. It was also surprisingly small with only around 60 entrants in the marathon, but also a 10K and Half Marathon on as well. I think the numbers were small as there was two other marathons on in Avondale and also the "stone mad Ultra" in Killkenny.

I travelled from Galway and was there early enough. They had allocated me no 98 even though this was 99 with my run on Thursday. At the start line I met with Crusader Bob Cahill who had recently won the Tullroan spring marathon and was looking in great sub-3 shape. There were also quite a few who had run the directors run the day before in what was warm conditions.

After a quick race briefing we were off and I noticed that after about 800m that I had failed to start my stopwatch. This was to bug me all day as I never really knew where I was all day and had to guesstimate off the 5K markers on the course. I also noticed on the line a "Winchester and district" vest. This had to be Ian Berry who is the membership sec of the 100 marathon club in the UK and I knew was a well sub 3 runner. Bob was going to have competition.

The first 10K was relatively straight forward but seemed into a blustery wind most of the time. I came through in 53 minutes (relative to my watch offset) which was slightly off recent runs. It was a quite complex tadpole shaped course with a 3K tail followed by 2 long loops (head). There was plenty of bottled water on the course and it was well marshalled. The course was however open to traffic and there were some sections on quite busy roads (I never feel 100% safe on these types of routes). Some of the more back roads were also quite pot holled and you had to just watch your running line. I was doing reasonably well at half way coming through in 1:49 which surprised me, but the legs got heavy in the second half and I could feel myself slow (not surprisingly really).  I had been following Dipak for quite a while (He had run the directors run the day before), but he slowly pulled away from me. Around 16 miles Ger Donohoe came passed. He had a quick chat to me about his plans for the year which includes a sub 3:15 attempt in Frankfurt. Good luck to him. Both Dipak and Ger came in well sub 3:40.

We hit the half marathon after around 32K and had plenty of company from that point on and as I had joined the back of the half marathon was able to pick off lots of people in that event. That kept me focused. 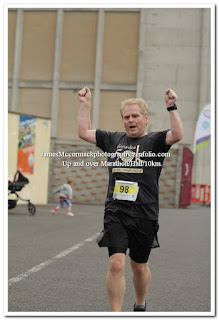 The race from this point was pretty uneventful (and mostly with the wind now) and I didn't really know my time (but assumed it was sub 4 hr pace). It was only when I turned into the final chute that I saw 3:51 on the clock and came over the line in 3:51:50 a full 43 secs faster than Thursday (be it a much easier course).

Bob was there at the finish line and had managed a PB of 2:55:01 but had been beaten by Ian Berry and a runner from Armagh. Well done to him. We both got nice T-Shirts and beautiful medals for our efforts.

There was lots of cake and Tea at the end and it was a nice small country marathon.

Now attention turns to my 100th run in Courtmacsherry on the 25th and there is lots of  things to do in preparation for that.