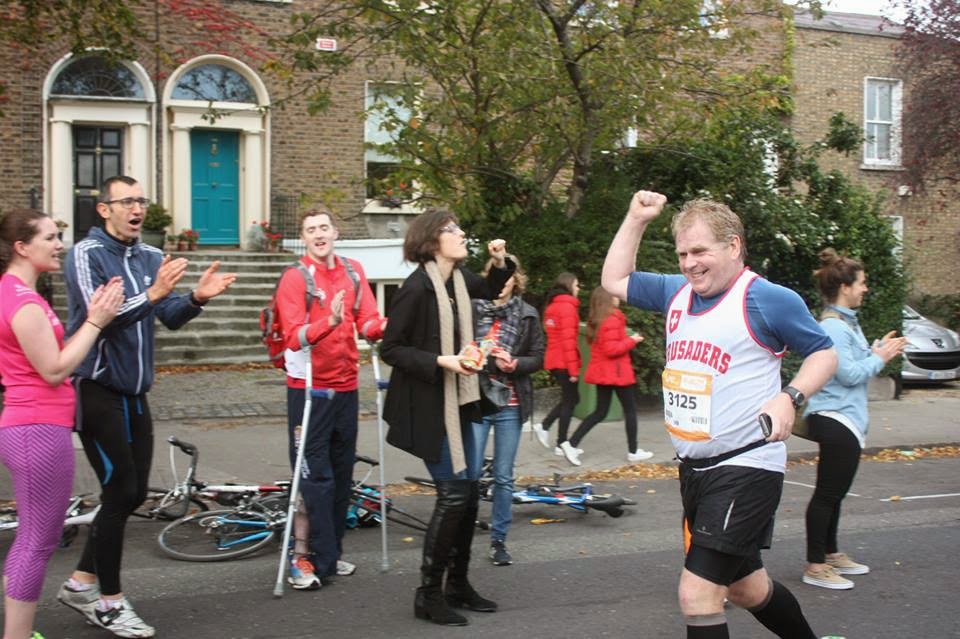 Outside of New York and London this is the best supported marathon I have experienced. The build up for this race had been going on for months. My club Crusaders have had a huge marathon group that has been training since early July under the eye of Coach Cottle and had put forward something like over 60 runners for this race. Even though I have been unable to train with them this year I have passed and chatted to them most Tuesdays and Thursdays on my recovery runs. The excitement on-line and with them was palpable.

Along side the runners there was also many plans afoot for the famous Crusaders roving support to be out and about. They are truly awesome and the period from mile 23 onwards was incredible with Beggars Bush just being special.

This was my 8th consecutive weekend running marathons and to be honest I was feeling a little tired and under prepared as I only had managed to get out for one recovery run since Amsterdam last Sunday. It was also my 40th marathon over the last 12 months. I think this will be my peak as I haven't entered so many for the rest of the year. But I am very happy for this to be a peak.

The weekend started early on Saturday with a trip to the exhibition in the RDS. There seemed to be a different registration process from previous years and there were massive queues for registration and it took an age. But after that was safely negotiated and the goodie bag was picked up (which wasn't bad) I had a good look around the exhibition. It is a good show, way better than some of the supposed bigger marathons. I met loads of running friends and browsed for a good hour before heading home to rest.

Sunday was to be an easy day so Linz and I headed to Glendalough for the morning. I thought I would drop in for a coffee at the Bike and Hike coffee dock in Roundwood but I had missed the season as its now shut to April. I did learn however that infamous Ultra runners Don and Donna have been hatching a plan with RTE for a 2 part documentary of them taking part in the biggest ultras in the world in 2015. Sponsorship I am sure would be appreciated.

Monday morning came and I was meticulous with my preparation.
Beet Shots (no mouthwash) and porridge with Chia seeds set the groundwork and I was off early to meet up with Ronan Higgins from Tullamore Harriers before the start. We made our way to government buildings for a few photos before dropping the bags off and making our way to the start. Everything worked like clockwork and it was a mild morning.

I was out of position immediately as I was in the sub 3:50 area and my goal time was 4:30. I therefore positioned myself to the back of wave 1. This was a great strategy as I ran on empty roads right through to the phoenix park. I may do this again in the future. I quickly came across Bob Manson from Crusaders who was also on a back to back from Amsterdam and was in full MDS training gear. He is off to New York immediately after for the run there next weekend.

The new route was very odd and I found the long drag up through the park particularly long and then up up and up some more through the Castleknock gates. The support was just brilliant and luckily for the supporters it was a great day for watching. After cresting, the run down back into the park was nice as was the park itself. We were then back on the old route but some 1.5 miles further into the run that I was used to. This time-shift messed with my head all day. At mile 10 Brian Ankers and Ronaldo Espina brought there 3:50 pacing group past me. I went through half way in 2:02. This was 6 minutes up on last week and I felt OK.

At Mile 16 Olwyn Dunne and Barry Casserly brought their massive 4 hr group past me. My initial plan was to go with this group but I was out of position from the start so couldn't.

I started slowing bad and at Mile 20 just passed Milltown (thank goodness I had just passed Kate Murray from Crusaders roving support) when my diesel engine finally gave up and I struggled badly from here to UCD. It was only that Lillian Deegan and I were swapping places that kept me going. At UCD I gave a big shout to Lillian that we only had 3 miles left and we headed off in formation. By Tesco at the Merrion gates we had regained ourselves and perked up by Joe Dunne and his support equipment malfunction we ran together for the last couple of miles.

The last couple of miles were absolutely brilliant. Rather than continuing onto Trinity we swung left at Slatterys pub and ran past Beggars Bush to the finish. The Crusaders had encamped themselves at the Beggars Bush pub and we got a great welcome. At this stage we spotted Lucy Foley who was on her 100th marathon and Clodagh Kelly on her 2nd in a month and caught them up. Also in the distance we spotted Bob Hilliard and caught him up as well. The last 800m were way better than the previous finish and Lillian, Bob and I finished together and I managed to get Lucy finishing her 100th just after. It was great.

The medal and goodie bag and Tee were duly picked up and it was off to meet Linz and Crusaders and a lot of my running buddies for well deserved pints before home.

I'm taking a couple of weeks off now to prepare for my onslaught on Marathons 73,74 and 75 which will be at the Quad Dipsea in San Francisco over thanksgiving.  Quad Dispsea