This was the first of the Spring Race Series for the East Of Ireland and was their mid-week race in March.

My heart sank when Frank announced it was going to be on the Howth course. This is one of the toughest marathon routes in the country with over 1800ft of climb on 4 punishing laps around Howth island.  I have done this course twice before and knew that my course best of 3:50 wasn't under threat as when I woke up the rain was absolutely lashing down. I really was not looking forward to this as to add to the misery it was only 3 days since my last marathon in Belfast and my legs hurt like hell.

The weather eased a little as I parked up in Howth and 18 toed the line in what has to be said was cold, windy, sleety, rainy conditions.  It was miserable. Dipak and Dave Brady arrived as we started and followed us. A number also had gone out early. Pretty much everyone had raced somewhere the previous weekend.

It was a self sufficient marathon but Ger who was injured, and who lived right on the course close to the start/finish setup an aid stop outside his house. So in actual effect it was very well serviced. It was also a free event as are all the mid week marathons for EOI.

The field spread out quickly and by the time we hit the hill for the first time at 3 miles I was on my own. I could have easily gone home at this stage. But this was my 49th marathon I only had 2 thoughts.

I did not go hard at all during this run as I was treating it with kid gloves and it was my last long run before Connemara. The hill was as long and tough as I remembered and I came through the first lap in 1:03. I was freezing, wet and alone. Ger at the aid stop raised the spirits and it was off on the second lap.

The only exciting thing that happened on lap 2 was Mark passing me on the hill and I could see by the trail of blood that was following him that someone forgot to Vaseline.

1:05 brought me through half way in 2:08 and I had to disguard the rain gear and hat as it was just dead weight and long since had stopped keeping me dry or warm.

On lap 3, half way up the hill Frank came past and let me know I was about to be lapped. Indeed Barry Casserly who was fresh off breaking 3 hrs the Saturday before in Killeigh duly flew past on way to a 3:07 which given he had only 4 days between events and this was Howth and it was miserable was amazing.

Lap 3 got me around in 1:07 and I was fading badly with the hill ahead one more time. I walked/ran up the hill not killing myself and managed to catch Fermin who was cramping. When I eventually got to the top I legged it into Howth coming a few seconds short of catching James in the village before crossing in 4:26:14. Not the fastest time but this was my 8th marathon in 7 weeks and it was miserable conditions on one of the most difficult marathon courses in the country.

Ger invited us all up for Tea and Stephen provided samples of his special soup which despite the portions was very tasty and well received.

Now the attention turns to 5th/6th April. Lindsay has has her TV series PUNKY www.punky.ie nominated for an IFTA award for best childrens program. The awards are announced at a gala ceremony on Saturday 5th in Dublin with the A list of Irish film and TV personalities, which is actually quite impressive. It can followed on RTE on Saturday night. Then I have my 50th marathon on the other side of the country with a 7am bus pick up in Galway at the www.connemarathon.com Ultra. So the plan for the weekend is: 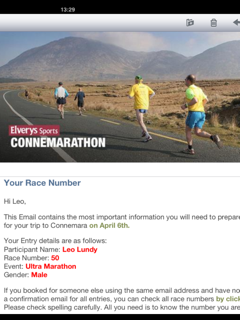 I'm as nervous as a kitten but I have all the miles in the legs now and I am running with a lot of friends both in the Ultra and the Marathon and I can't wait. Thanks also to Ray the Race director who allocated me the No 50 bib for my milestone run. The Connemara half marathon was my first ever running race in 2004 which just adds to it more as its a 10 year anniversary as well.